Books for a children’s library

Three students from College Emilie-Gourd, Geneva, have achieved a social work of a special kind: to create a children’s library at a school in rural Madagascar.
Sabine Finci, Zoé Glaser and Charlotte Vérolet chose the project as an A-level project in Social Sciences. The idea to create a library in rural Madagascar appealed to them particularly, as the countryside is an area where books are nearly inexistent. French is the second official language; it is taught at School and at University.
In Spring 2005, Sabine, Zoé and Charlotte gathered 2000 books with the help of the Association Gecris, Geneva. It is an association who collects unused books from schools and colleges, and stores them at a safe place.
The books were labelled by categories of age group, genre and topic, registered in a catalogue and shipped on the ‘MSC London’ to Madagascar!
A few weeks later, by end of June, the students left for Antananarivo, in order to collect the shipping.
New challenges were waiting for them: to take the books through Customs. The task proved not to be an easy one! At last, the load was brought by van to the village of Ambohibao, about 20 km from the capital. It was fortunate that the students had made many friends who could help! 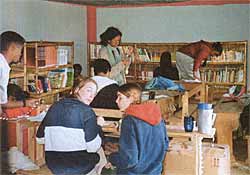 The books arrived safely at the village, where they were put on shelves, written down in a new catalogue and selected for special activities.
Students and teachers are very happy about the Library.
The majority of the pupils undertake a walk of over an hour to go to School, each morning.
In the afternoon, the pupils help their parents in the fields.
Neither electricity nor running water is found at the School. The pupils bring a flask filled with water for an occasional drink.
The experience filled Sabine, Zoé and Charlotte with joy and a sense of pride: not only did they learn a lot, but also, they have made wonderful new friends and came back with the feeling of having accomplished something useful: to give to a school a Library!
Well done, Sabine, Zoé and Charlotte, for a worthwhile A-level!

The Jonas Foundation was happy to support this project, which builds bridges across cultures and promotes the access of literature in a remote area.

In June 2006, the project won the KORCAK PRIZE of the Collège Emilie-Gourd as the Best Humanitarian Project of the Year! Congratulations!