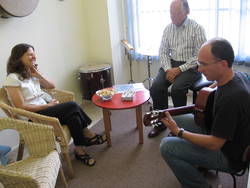 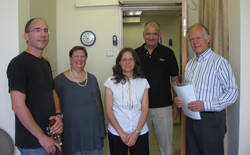 Ulrich Sigwart on his visit to Haifa

Singing as a means of communication!

130 children are coming daily to the Milman Centre. Every child will benefit from music therapy; it releases pain, aggression, or in the opposite, joy and humour.
But for some, music is the only means of communication: “Opening a window from the autistic child’s world to us and from us to his heart” (Gideon Ra’anan, Milman Centre).
Milman Centre, “Netzer”, Haifa (Dir. Dorit Ben Yosef)

In Milman Center (in Haifa and in the city of Carmiel in the Galilee at the north part of Israel) we treat around 130 children all together. We try to get into situation in which every child will benefit from music therapy. Up to now we have only 8 specialist how can give music therapy, and the children who usually come for therapy stay with us for several years (since the first diagnosis, which is around  the age of 2 years or two and a half, and until they go to first class in school at the age of 7). In case the child cannot get the music therapy (due to lack in staff) in a certain year, than they will get it in the next coming year. Most of the children get the music therapy once a week, but sometimes when we see that it is essential for them (like in cases when they cannot speak but only through singing as a mean of communication), than we make every effort to widen the number of therapies. All therapies are conducted together with the parent, child and the therapist. As a rule, all the children, and every day, enjoy music and singing at the beginning and at the end of each therapy day, which is a shared meeting for all the children and parents and staff members every day.

Most of the children come to the Milman Center twice a week, each time for 5 therapy sessions (in the morning or in the afternoon, in other days of the week they go to the kindergarten, which can be special or regular ones).

Toddlers who go to our special therapeutic kindergarten go there 6 days a week from the morning until late afternoon.(we have two of them in Haifa, 7 children in each one, and seven therapists in each one, it is a one-on-one therapy). Another group of children get from us the therapy at their kindergartens where they go (not ours).

The effect of the music therapy on the child is different from one to another. For some it is the  main and even the only mean of communication; In cases of children who do not speak at all but sing, or children who can show emotions, we try to divert those emotions through music and singing.   In these cases the broadening of his/her musical horizon means broadening the language options for the child and opening a window from the autistic child’s world to us and from us to his heart. Other children can release pain, aggression, and on the contrary, even joy, and humor through the music. Sometimes music is the major or sole tool to make the child laugh. Children with higher function and ability enjoy music in the ordinary manner, and sometimes it is possible even to continue what has begun as an emotional therapy into the regular, normal music learning.

Another aspect is the intensification of the relationships between parents and children through music. Sometimes it is very difficult for a parent to express emotions to the autistic child, and even to show love. Singing and paying music is a wonderful method to develop these relationships. Throughout the therapy sessions we experience frequently laughter and tears either from parents or child.

Music truly develops the children and enables their individual progress; it is very important factor for the children and unlike the “Normal” world for some it is the only communication between our world and the autistic child’s world.