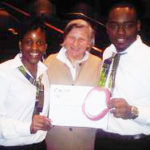 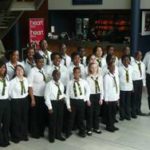 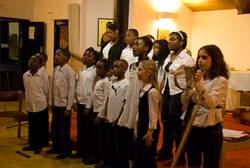 The Jonas Singers form the Alumni of the Jonas Music Project and act as a role model to the School. Over a decade, the students became close friends. The choir has been singing regularly and has some outstanding performances on its record:

Concert at the Round House, London, «Because I sing» (Alain Platel, A.Gough) in 2001. Singing under the Christmas Tree for the Launch of the Year of Sports (2004) in the presence of the United Nations Ambassador for Sports, Adolf Ogi.

Singing at the First UN-Session of the Human Rights’ Commission, in June 2006, in the presence of Kofi Annan.

Many other happy occasions to enjoy music and friendship knit the members of the Choir together.

In September 2006, Chanel Kiasi has taken the direction over the Jonas Singers.

On March 28th 2010, at Milton-Keynes, the Jonas Singers have been attributed the BBC Award «Choir of the Day» in the «Choir of the Year 2010» Competition (Dir: Diane Bakemhe. Solo singer and piano: Chanel Kiasi).

In February 2011, the Jonas Singers sang for the Launch of the Jonas Foundation UK Charity at Founders’ Hall, Chelsea (Hill House School), in the presence of the Ambassador of Switzerland, HE Anton Thalmann and his wife, and Mrs Dominique Thalmann.