Beit Hashanti: A warm home, therapy and rehabilitation for youngsters in difficulties 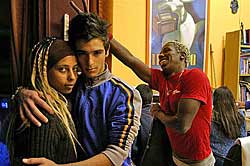 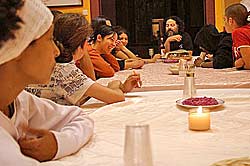 Beit Hashanti has the aim of providing a warm home to youngsters affected by physical, sexual and verbal abuse, orphans, victims of parental neglect who have dropped out of formal therapeutic services, new immigrant youngsters and lone soldiers. For many youngsters Beit Hashanti is a last chance before the slide into life on the streets, as well as a last opportunity to be in a warm and loving home.
Beit Hashanti offers a residence to 35–50 youngsters at any given time. Some of them stay for some days, for others Beit Hashanti becomes their home for months, even years.
An importand part of therapy in Beit Hashanti is music, dance or theatre. The Jonas Foundation is sponsoring in 2006 an arts animator and a percussion teacher. 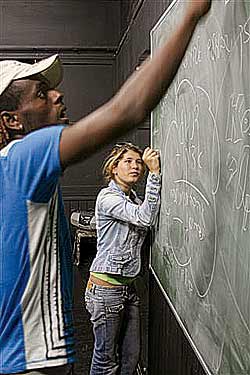 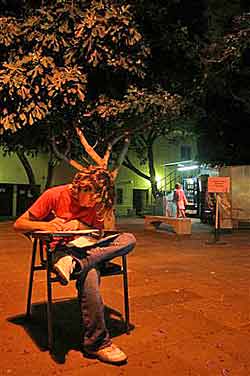 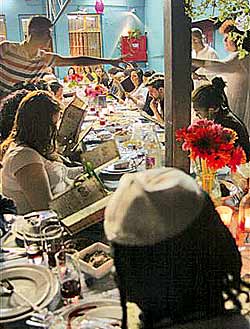 The Shantherapy project was von in 1999 from the successful use of therapeutic arts as a tool to helping the youngsters residing at Beit Hashanti to overcome their traumas and return to a normal way of life.

These youngsters come to Beit Hashanti with no more than the clothes on their backs, and baggage comprising anger, hurt, frustration, resentment and bruises. They come from families of drug and alcohol addicts, from abusing families (physical, mental and sexual), from affluent and cultural families and from poor and borderline families.

The youngsters either find their own way to the home or are sent by the authorities (police, courts and youth workers). All personal needs are provided and once they have settled-in the youngsters attend educational or vocational frameworks during the day and in the evenings. After completing homework assignments, they attend therapeutic arts activities. Acquisition of the tools for expression through creative means helps to build and strengthen ego and self-esteem.

The art and sculpture acitivities allow the youngsters to channel their pent up feelings into their compositions. They are then able to view their frustrations from outside themseves and try to deal with what they see within their creation. Many of the pictures produced now hang on the walls of the home and serve as a focus for discussion. One does not need to be a qualified psychiatrist to understand what the pictures describe, however among the dark and sad works are also brighter pictures depicting hope.

Within the dance activities the youngsters put their frustrations into a choreopgraphy of their pent up feelings, allowing theim relief as well as an opportunity for group discussion and empathy through dance. This acitivity also helps them vent their feelings through dancing to various forms of music.

Drumming is particularly popular and is an excellent medium to free pent up frustration and anger.

The stories of Pablo and Riki

The alternative therapies are carried out fully clothed by specially chosen certified therapists, teach the children that touch is not painful, threatening and most important, it is carried out according to the child’s wishes.  They decide where and when to receive therapy, where and when they will be touched, so that we return the control of their bodies to them, together with the feeling of security and that was taken away from them so many times in their lives.  As if by magic, they are able to remove the layers, the masks and expose their wounds in order to allow us to heal them as much as we can.
Following are a few stories related by the children who, without the Shantherapy project, their treatment would have been virtually impossible.

Pablo
Pablo was born in Peru to a Jewish father and Christian mother. His father left home and his mother was left to bring up her child almost single-handed. Even as a child Pablo started wandering on the streets of his town, in the alleys where drugs and crime were rampant, and even then he understood that in order to survive he had to learn the rules of the street and especially not to believe in anyone in the hostile and threatening environment in which he found himself.
In order to help his mother he started selling drugs and stealing – aged 8. Many times Pablo slept in the streets as his mother took up with men who were violent and criminals who beat both Pablo and his mother and he hoped that it he have his mother money she will renounce the support of the bad men in her life. He accordingly did all he could to help her including things that were not completely legal.
His extended life on the streets and exposure as a child to bad sights that included murder, rape and crime left painful and negative memories on his young soul.
One night Pablo arrived at Beit Hashanti and asked for help, and from his face it was evident that he was tired from life’s hardships.
Pablo didn’t sleep… Not on the first night, or on the following night. He would come to the counselors’ room looking shocked, scared and battered from bad nightmares that didn’t leave him and even increased from day to day.
Within the framework of Shantherapy’s art group, Pablo drew his nightmares and with the help of the teacher, found a way of expressing himself and overcoming his pain and fears, and especially the bitter memories of his harsh childhood.
Concurrently Pablo received homeopathic treatment and dialogues with a psychologist, which helped him, slowly slowly, to open up to us and reveal all that he had undergone. The nightmares decreased and he started sleeping at night.
Due to the abuse he had undergone he had difficulties being touched and often closed up within himself. Shiatsu treatments helped Pablo to open up and to build trust in others.
Another way that helped him connect to the youngsters at Beit Hashanti was football. At a football match held just a few days after his arrival, he was the game’s star and scored a few goals for the Beit Hashanti team.

Riki
Riki grew up within a family from the Caucuses and suffered from mental and physical abuse all her life.
Her father and brothers would beat her mercilessly as if she were a punch bag, and for days on end they would lock her in the house and not allow her to see the light of day. Sometimes she was even prevented from eating and washing. As if this wasn’t enough, she would sometimes be chained to the fridge and forced to sleep on the floor during cold winter nights.
They would regularly and inhumanely crush her femininity, self-confidence and her trust in others.  They did with her whatever they wanted and turned her into an object to be used for their pleasure.  Her scared and helpless mother could do nothing.
Aged 14, Riki gathered her courage, made a complaint against her father and ran away from home. She was taken into various hostels and boarding institutions but was expelled from all of them due to behavioural problems and repeated outbursts of anger. Eventually she was taken into Beit Hashanti and was ready to rehabilitate her injured soul.
We knew we had a lot of work ahead of us, that the remedy would take time and that we would need a great deal of patience.  In addition to the team’s work with her on overcoming her violence and finding the tools to help her express herself in a positive way, Riki was introduced to therapeutic horse riding which helped to rebuild her self-confidence and awareness, through building trust and overcoming frustration and fear, by raising her self-esteem, and even taught her proper learning habits and normal social behaviour.
The horse chosen for her created a feeling of connection and love that helped Riki to connect with other people.
Riki also took part in many of the Shantherapy activities, including Belly Dancing which allowed her to connect to her feminine side; Reiki, which provided a healing and secure touch; and Theatre that allowed her the self-expression to overcome the traumas she had undergone.