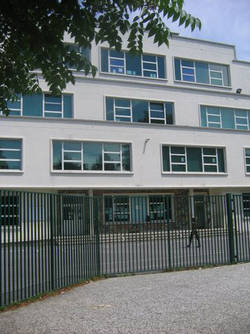 New pupils have joined Mechthilde Huber’s piano classes: Salomon, Sonsave, Fred and Zineb! They make fantastic progress on the keyboard. Older pupils, having reached the end of their scolarity, left the Collège: Stacey, Kodou and Kathleen. Some joined a Lycée, whereas others entered an apprenticeship. We wish them all the best for their future and are looking forward to keeping in touch with them.

Mechthilde Huber, a young musician trained at the Carl Orff Institute in Salzburg, brings music, imagination and happiness to a little group of pupils at the Collège Pierre-de-Geyter !
Piano lessons happen on a Wednesday afternoon. Sounds and of rhythms are explored, the manifold colours of creativity discovered. Singing, tapping, dancing, are as much part of Mechthilde’s music lessons as are discipline and regularity.

An enthusiastic School Director, Eric Souève, is supporting the whole project and helping in whatever way he can.

‘How do you motivate your pupils to practice?– This is an everlasting question to all music teachers!
The pianos are available through the Secrétariat of the School, where the keys to the Music Room have to be collected for practice.

A step requiring motivation and consistency. But, the pupils have become a closely-knit group of friends, practicing at odd hours, composing together little songs…

Laughter can be heard, a keen interest can be perceived – Music has become the ‘private garden’ of each pupil, a ray of hope…

To Dounia, Miriam, Cloé, Kodou, and to the others…. go our wishes.